10:30 a.m.  100 members of the Calgary Police service and other local service units will march to the Field of Crosses and take up position on the east bound lanes of Memorial Drive.

11:00 a.m.  An artillery gun of the 20th Independent Field Battery (Lethbridge) will fire a signal gun at the exact moment the First World War ended and commencing the start of 2 minutes silence.

11:02.  A second gun will fire a salute ending the 2 minutes of silence and beginning a 21 gun salute with one gun firing every minute until 11:22.  Three guns will fire in turn.

Parking is limited, we recommend parking at Eau Claire and walking over the foot bridge. 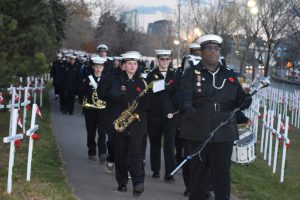