22 April, 1915,  Kitcheners’ Wood, Belgium (about 3.5 km north of Ypres):  It was pitch black when the 800 Canadian soldiers of the 10th Battalion arrived.  Every soldier knew the situation was desperate and  that many of them would not see morning.  Earlier that evening, the Germans had launched the first chlorine gas attack of the war against the French soldiers holding the line adjacent the 18000 Canadians (see map) of the 1st Canadian Division.  The Germans broke through the French line and advanced to Kitcheners’ Wood threatening to collapse the entire Allied position.  The 10th battalion was in reserve near Ypres and in the early evening were ordered to counterattack at Kitcheners’ Wood.

Supported by the 800 men of Victoria’s 16th Battalion, the 10th fixed bayonets.  It was Canada’s first attack of the war.  At 11:46 p.m. they stepped off in silence and into history.

Lt Colonel Russell Lambert Boyle (35) was born in Ontario and cut an imposing figure. Ruggedly handsome, standing 6 ft 2., Boyle fought in the Boer war and was seriously wounded.   Back in Canada, the entire Boyle family came west and began ranching near Balzac.  Boyle was a natural born leader, he became a politician and joined the militia (reserves). When war came in 1914, he received command of the 10th Bn comprised equally of soldiers from Calgary and Winnipeg.

Now he was leading his men into battle.  He told them, ” We’ve been itchin for a fight and now we will have it”.   The woods were 500 meters away.  The battalion diary reported what came next: “…the order to advance given, not a sound was audible down the long waiving lines but the soft pad of feet and the knock of bayonet scabbard against thighs.”  About 200 meters from the woods, still undetected,   when a 2 meter hedge loomed out of the dark.  Cutting through the bramble with bayonets alerted the Germans who greeted the 10th with a deadly hail of  machine gun and rifle fire.  Soldiers were cut down in droves or took cover.  Boyle cursed at his men to keep moving.  They charged headlong into German line and a bayonet brawl ensued.  The Germans were driven back but when reinforcements arrived they slowly forced the Canadians back.  The fighting went on all night and by morning the Canadians had dug in on the edge of the woods .  The attack had temporarily stopped the German advance buying valuable time to fill the gap with fresh units.   But the cost was heavy.  The 10th Bn suffered over 600 casualties, the 16th about the same.  Boyle was one of them. 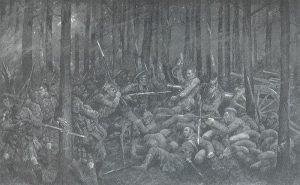 Chaos and carnage at Kitchener’s Wood

Just after reaching the woods, five machine gun bullets stitched his thigh and groin.  His wounds were bound and he hobbled back to the medical station.  His initial prognosis was good but three days later he died in hospital from blood loss (transfusions were unknown at this time), He  lies in Poperinghe Old Military Cemetery, Belgium  He was 35.  Sadly, the war was not yet finished with the Boyles.  Younger brother, Mahlon, serving with Edmonton’s 49th bn was killed near Vimy Ridge on May 3rd 1917 , he was 35. 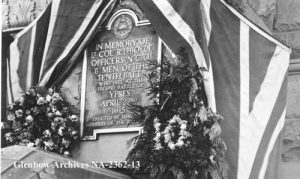 In 1918 the City of Calgary honoured Colonel Boyle and the 10th Battalion with a plague on the front steps of City hall (forty returned veterans who followed Boyle that night were in attendance).   Today, the Calgary Highlanders perpetuate the 10th Bn and each year on the anniversary of Boyle’s famous attack at Kitchener’s Wood commemorate the battle in a ceremony on the steps of City Hall.

66,000  Canadians fell in the First World war,  a sad tally that includes 6100 Albertans.   Russell and Mahlon Boyle are commemorated each November in the Field of Crosses.  Lest we forget. 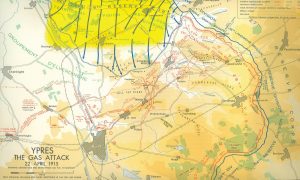