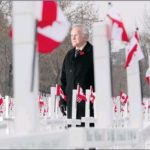 The crosses are back on Memorial Drive. There are thousands of them, each white marker a stark reminder of the many southern Alberta soldiers to die in combat.

Murray McCann, whose McCann Family Foundation funds the project to erect crosses along Memorial Drive in honour of Alberta casualties of war, said the realization that “freedom isn’t free” spurred him to begin the project. END_OF_DOCUMENT_TOKEN_TO_BE_REPLACED