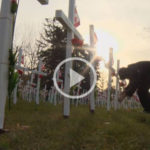 CALGARY — Students from Delta West Academy placed a silk flower on each of the 3,200 crosses at the “Field of Crosses” on Memorial Drive Thursday.

The annual act helps the students appreciate the enormity of the sacrifices southern Alberta soldiers have made.

Delta West Academy is the only school with that honour and privilege. END_OF_DOCUMENT_TOKEN_TO_BE_REPLACED 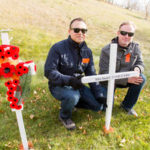 Volunteers in Calgary have spent days setting up 3,200 white crosses commemorating southern Albertan lives spent in the service of the nation.

In it’s seventh year, more than 100 volunteers with the Field of Crosses Memorial Project finished erecting thousands of white crosses Saturday on the north side of Memorial Dr. between Centre St. and 3 St. N.W. END_OF_DOCUMENT_TOKEN_TO_BE_REPLACED 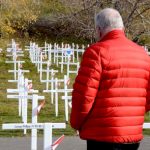 For Laura Vanderkruk, organizing volunteers to set up the 3,200 memorial crosses on Memorial Drive to honour Southern Alberta’s veterans has become a way of keeping her family close.

George Bittman, Vanderkruk’s father, was a navy veteran who helped organize the project until his death in 2011. For the past few year’s, Vanderkruk has taken over the project END_OF_DOCUMENT_TOKEN_TO_BE_REPLACED 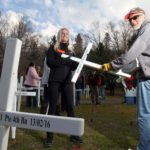 More than seven years ago, Murray McCann was driving through the mountains in Georgia before Memorial Day when he noticed a small cluster of crosses along the side of the road.

Initially, McCann thought a collision had claimed three lives and someone had erected a small makeshift memorial to honour the victims. But as he rounded the corner, he saw rows upon rows of crosses, END_OF_DOCUMENT_TOKEN_TO_BE_REPLACED