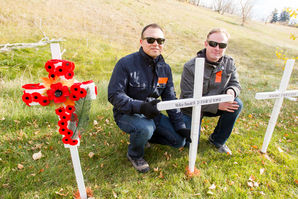 Volunteers in Calgary have spent days setting up 3,200 white crosses commemorating southern Albertan lives spent in the service of the nation.

In it’s seventh year, more than 100 volunteers with the Field of Crosses Memorial Project finished erecting thousands of white crosses Saturday on the north side of Memorial Dr. between Centre St. and 3 St. N.W.

Each cross represents a life lost in a Canadian conflict or peacekeeping mission.

“We have so many families that have lost members of their families due to their service, and this is a chance for them to pay their respects,” said David Howard, president of the Canadian Legacy Project, which operates the Veterans Food Bank.

But Howard is encouraging Calgarians to also think of the veterans who have come back alive.

“This year is one of the tougher times for our veterans in need,” he said.

“I think so many times people think of veterans as being people in their 80s and 90s from World War Two, but we have veterans that are just getting back from Afghanistan or peacekeeping missions.

“They’re coming back to southern Alberta, they’re looking for jobs in the oil patch and those jobs aren’t there anymore.”

For that, he encourages Calgarians to give to the Veterans Food Drive.

From Nov. 1 until Nov. 11, there will be sunset and sundown flag ceremonies at the Field of Crosses Memorial.

At about 10:30 a.m. Nov. 11, there will also be a Remembrance Day ceremony with a performance from a childrens’ choir.

Meanwhile Saturday, veterans gathered at the cenotaph in Memorial Park to pay respects to Cpl. Nathan Cirillo and Warrant Officer Patrice Vincent, who were murdered last year on Canadian soil.

Vincent was killed Oct. 20, 2014, after being purposely struck in a hit-and-run in St-Jean-sur-Richelieu, Que.

Two days later in a separate incident, Cirillo was gunned down at the National War Memorial in Ottawa, by Michael Zehaf-Bibeau, who moments later was shot dead when he entered the House of Commons Centre Block brandishing a firearm.