Students get heartfelt history lesson with Field of Crosses 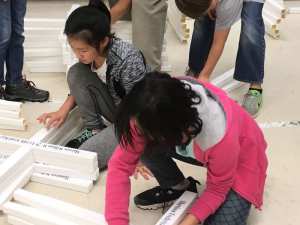 What began with a few hundred white crosses in 2009 has grown to more than 3,200, all paying tribute to those who died serving their country.

“We’ve made it bigger and organized more and gotten more crosses. (My dad) was so passionate about it and so committed and it really means a lot to step in his shoes and carry on in his name,” said Laura Vanderkruk, site chair of the initiative co-created by her late father, George Bittman.

Students from Hillhurst School help prepare crosses in office space donated by Raytheon Canada Limited. The crosses will be placed along Memorial Drive next weekend for the annual Field of Crosses Memorial Project. Calgary

The Field of Crosses Memorial Project sees rows of crosses installed along Memorial Drive between Centre and 3rd streets N.W. It’s a massive undertaking to build, clean, name and alphabetically stack the crosses and, for the third year, students from Hillhurst School volunteered their labour. The crosses will be placed in Sunnyside Bank Park next weekend and every day, from Nov. 1 to 11, the flag is raised at sunrise and lowered at sunset, with accompanying ceremonies taking place. The public can walk among them anytime during the 11 days, which coincide with the Calgary Poppy Fund’s annual fundraising campaign and the Canadian Legacy Project’s Veterans Food Drive.

The crosses are simple, just white plastic bolted together with a flag attached. But they are deeply poignant as each is inscribed with the name, age, rank, regiment and date of death of a southern Albertan killed in a conflict over the past century. For elementary-aged students, that brings home the largely irrelevant concept of war and death.

“This is terrible to see how many people died and just from this part of Alberta. It’s depressing,” said Sadie Vipond, 10, who was washing the crosses in a space donated by Raytheon Canada Limited. “I guess I feel like we still remember and their spirit lives. It’s important for people to see them.”

A classmate, Joel Van den Berg, 10, was helping bolt the crosses together and stack them.

“They fought in the war. Maybe some sacrificed themselves and others were maybe shot down. This keeps them alive in a way so we remember them.”

“This is their way of contributing to helping the community remember the people who fought for us. They feel like they’re positively contributing instead of just thinking about that. The kids want that active participation,” said Law.

“They get to appreciate how many people went and fought and died. To see the crosses is something concrete.”

The memorial project got its start in 2009 after a Calgary businessman, Murray McCann, saw a similar display in the U.S. After consulting with Bittman, former head of the Calgary Poppy Fund, legion representatives and city officials, the Field of Crosses was born. It has become a major gathering spot for annual Remembrance Day observances.

Vanderkruk takes great satisfaction from carrying on her dad’s legacy, especially as she feels she’s passing on a vital message to youth.

“Part of our mission is to educate the next generation so they’ll understand our freedoms are bought and paid for by the people who died and whose names are on the crosses. They’re getting it.”

For more details and a schedule of events, go to www.fieldofcrosses.com