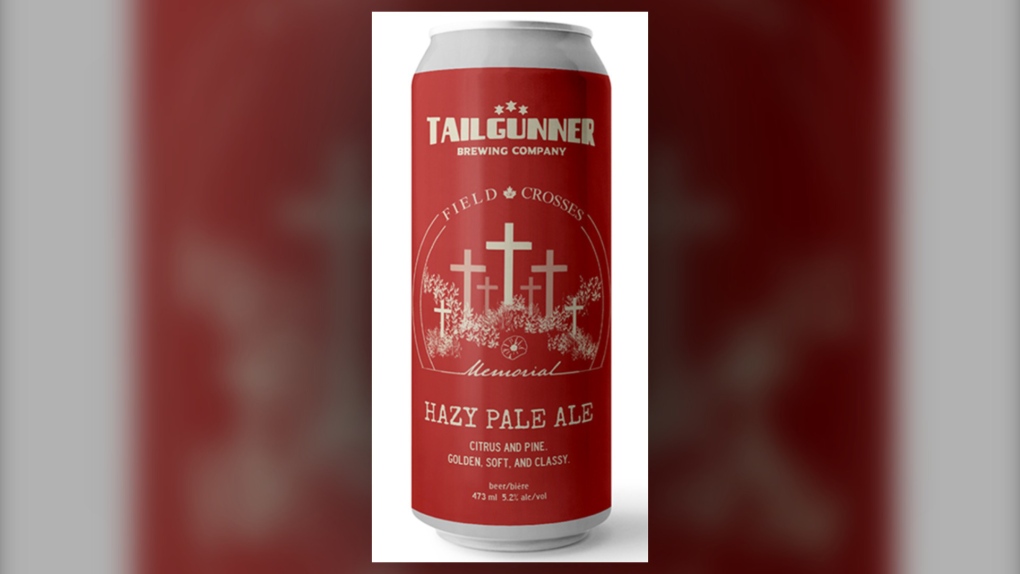 CALGARY – The annual Field of Crosses memorial project along Memorial Drive is set to receive some financial support from Calgary’s Tailgunner Brewing and its customers.

The Sunalta-based brewery is in the midst of its second run of its Field of Crosses Hazy Pale Ale — an additional 1,000 labeled cans — after the first 500 cans were quickly snapped up from its website and beer stores around the city.

The Field of Crosses will receive $4 from every four-pack sold. The cause is close to the hearts of the owners who look to celebrate and honour the ‘greatest generation’ beginning with the name of their business.

“My grandfather (Linton ‘Lint’ Stephenson) was a tailgunner in a Lancaster in World War Two,” explained co-owner Mike MacLeod. “Flew four successful missions and on the fifth one he got shot down unfortunately and crash landed in Holland and he was the only survivor, which is not really typical. It’s usually the tailgunner gone and everyone else gets back, but this was a reverse of event and he ended up getting captured by the Nazis. He was a POW (prisoner of war) for almost three years then obviously was saved, liberated.

“He came back to Canada and started a family and just a really, really neat hard-working kind of humble, quiet guy. No one really even knew his story until his later years when he started writing memoirs and stuff.”

The majority of the brewery’s offerings pay homage to the notable period of Canadian history — including its Ajax dark lager honouring the town where Macleod’s grandmother worked in a factory during the war effort — and depictions from that era are expected to feature prominently when the doors open to its beerhall/taproom in the coming weeks.

The owners of Tailgunner Brewing say they took additional care to ensure the crosses and poppies on their cans were viewed only as a tribute and, once confirmed, the label production became a family affair.

“(We) went through the process of finding out what was permissible to use on the can and the licensing around the poppies and all that other stuff,” explained Cael Tucker, Tailgunner’s co-owner. “So it was kind of a neat process and kind of an interesting little thing is that they kind of mapped it out and it was actually my daughter (16-year-old Ella) who did the graphic for the can and my son (14-year-old Coen) wrote the copy.”

The total donation to the Field of Crosses Memorial Project is expected to exceed $1,500 as several vendors have said they will match Tailgunner and donate an additional $1 per can sold.

“We think it’s an extremely important cause. I feel there’s been an awakening about Remembrance Day, especially over the last couple of years,” said Tucker, citing a noticeable increase in the number of poppies he’s seen people wearing in recent years. “It certainly feels like people are paying the proper respect and really becoming more aware of what that means, especially with some of the younger generations here.”

The Field of Crosses — located on the north side of Memorial Drive between the Centre Street bridge and the Calgary Curling Club —is comprised of more than 3,500 crosses each recognizing the sacrifice of a southern Albertan killed while serving Canada.

Sunrise and sunset ceremonies will take place within the Field of Crosses each day through Nov. 10. The Remembrance Day ceremony will be a private event, but will be available to the public for online viewing.