Thousands of fallen soldiers from southern Alberta are once again being honoured in the Field of Crosses in Calgary. 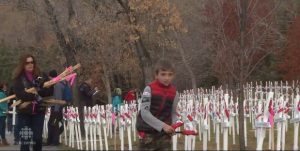 Volunteers began work Saturday on the field, which sees the name of each southern Alberta soldier killed in action — dating back to the Boer War —  written on a white cross erected along Memorial Drive near Centre Street.

This is the ninth year for the memorial.

Learning the name of each soldier killed is no easy task, said founder Murray McCann.

Volunteers spent months visiting towns and cities across southern Alberta, checking cenotaphs, legions and even church records for names, which were then researched.

“There was no central place to find out,” said McCann.

“Any place we could research we have. Then people started sending in names.”

More than 100 names were added this year, said McCann, bringing the current total to 3,410.

Murray McCann was inspired to create the Field of Crosses nearly a decade ago during a trip through Georgia. (Sarah Lawryniuk/CBC)

“I’d like to think we have everybody, but if anybody has a relative or knows of a name of a soldier who went off to war and didn’t come back from southern Alberta, they can go to our website.”

The idea for the Field of Crosses came while McCann was travelling through Georgia in the U.S. about a decade ago.

“I came across some crosses, which I thought was indicative of a bad accident, there was a whole row of them,” he said.

A boy places Canadian flags on crosses honouring fallen soldiers from southern Alberta. The crosses along Memorial Drive will remain up until Nov. 11. (Sarah Lawryniuk/CBC)

“I realized it was their Memorial Day, it was in May, and these crosses they had put along the side of the road were for soldiers from that small town … and the surrounding areas. It had such an impact as to how many had lost their lives over the years protecting our freedoms, and I wondered how many from southern Alberta had given up their lives for the lifestyle I enjoy and all Calgarians do.”

Services will be held at sunrise and sunset each day between Nov. 1 and 11